Colon cancer is cancer of the large intestine, or colon. The colon is a muscular tube that forms the last part of the digestive tract. Semi-liquid food waste (stool) from the small intestine enters the colon at the cecum (the beginning of the colon). As the stool moves through the colon, the colon absorbs water and stores the waste until it is passed out at the rectum.

In the lining of the colon, small fleshy clumps of tissue, called polyps, can form. Most polyps are benign (not cancerous), and cause no symptoms. However, over time, a polyp can change and become cancerous. The larger a polyp becomes, the higher chance it has of becoming cancerous. Most cases of colon cancer begin as polyps.

There are several kinds of polyps that can be identified, either by a doctor or in the lab. Polyps that are adenomatous are considered to be pre-malignant, meaning they will most likely become cancerous over time.

When a polyp becomes cancerous, growing abnormally, it may involve more tissue of the colon or rectum. Over time, the cancer can become metastatic, meaning it has spread to nearby organs or to glands called lymph nodes. The earlier a cancerous tumor is removed, the better chance of preventing its spread.

Whether you have polyps, or if you already have cancerous growths, the best treatment is to remove them.

Symptoms of colon cancer include changes in bowel habits, blood in the stool, and persistent cramps, gas, or abdominal pain.

Risk factors for colon cancer include:

There is also some evidence that a low fiber/high fat diet may increase the risk of colon cancer.

Cancer is “staged” based on where the cancer is located and if it has spread to lymph nodes or nearby organs. Different stages of cancer require different treatment. Knowing the stage of your cancer will help you and your doctor plan your treatment.

Colorectal cancer has five stages, based on how much the cancer has spread: 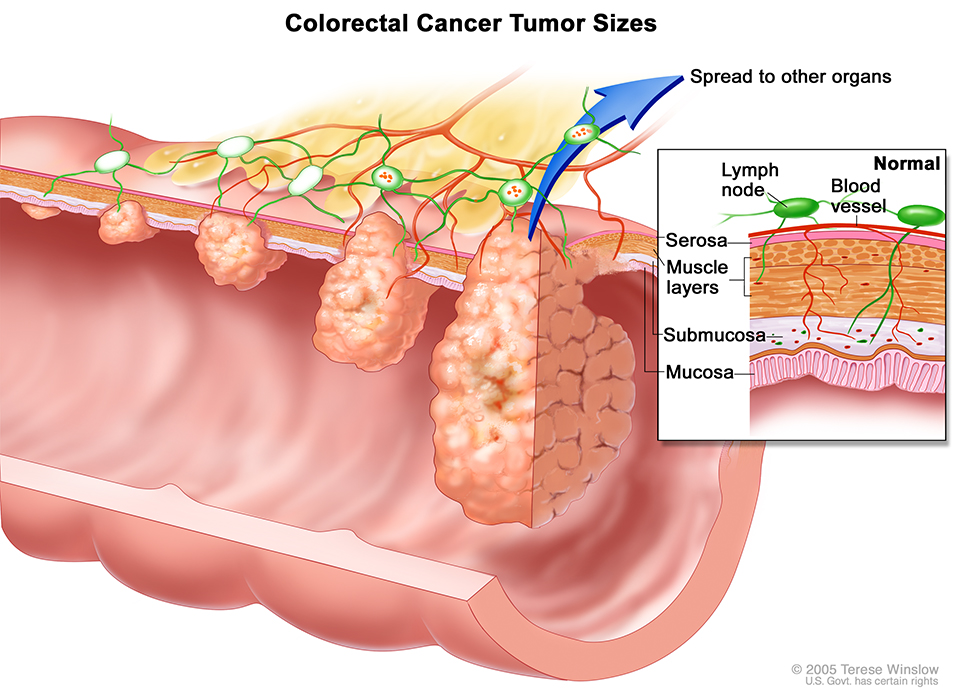 Screening for Colorectal Polyps and Cancer

The best test doctors have for detecting abnormal growth in the colon is a colonoscopy. This test may be done at a surgery center or in the hospital on an outpatient basis. Your colon must be completely empty for this test, so you will need to perform a “bowel prep” the day before, using a laxative to clean out your colon and consuming only clear liquids. After midnight on the day of the test you must take nothing by mouth (“NPO”).

Before the test, a nurse will start an IV in your hand or arm and give you a medication to relax you. You will not remember the examination. The doctor inserts a long, flexible, lighted tube called a colonoscope into your rectum. This scope allows the doctor to view the entire colon and if a polyp or abnormal growth is found, the doctor may be able to remove it right away. If the polyp cannot be removed due to size, location, or shape, then a sample will be taken for a biopsy and sent to the lab to detect cancer.

A colon resection is surgery to remove part of your colon. During a colon resection, the surgeon removes (resects) the affected piece of colon and then sews the two new ends together in an anastomosis. The repair is designed to maintain your colon’s normal tube-like shape, so you can regain your normal bowel movements. Colon resection may be done as open surgery, with an incision down your belly, or laparascopically. In laparoscopic surgery, the surgeon makes 4 or 5 small incisions and inserts tiny instruments and a camera to perform the surgery while he or she watches it on a video screen. A gas is used to inflate the belly and lift the abdominal wall away from the internal organs. Your surgeon will determine which option is best for you.

Colon Resection with Colostomy. If the cancer is extensive and the surgeon cannot rejoin your colon with your rectum, the surgeon will create a colostomy, or a new opening for the colon on the outside of your abdomen for removal of waste. The colon is brought out through the opening and formed into a “stoma.” When you have a bowel movement, stool passes out through the stoma and into a colostomy bag or appliance.