A woman’s journey through diagnosis, treatment, and recovery.

The maze of breast cancer diagnostic paths and treatment options can be daunting; especially at a time when the emotional impact of a diagnosis can be overwhelming. Our surgeons focus on providing the best care for each individual using the most non-invasive option appropriate. Our surgeons work with you and your provider to determine the optimal treatment strategy.

Annually, thousands of women receive abnormal mammogram reports and require further medical investigation to identify the irregularity and rule out cancer. An irregular mammogram will result in your care provider recommending further imaging scans and possibly a biopsy procedure. It is important to note that for over 80 percent of these women the diagnosis will be a benign (non-cancerous) breast condition.

It is also important to note that today’s national statistics indicate that breast cancer is being detected earlier than ever before, with outcomes for stage 1 cancers resulting in a five year survival rate of 98 percent.

For over 25 years, Oregon Surgical Specialists has been dedicated to the providing the most advanced treatment options for breast disease. Oregon Surgical Specialists’ entire surgical team is highly experienced in the diagnosis and treatment of breast cancer. Our surgeons focus on providing the best care for each individual using the most non-invasive option appropriate. We work with you and your provider to determine the optimal treatment strategy. 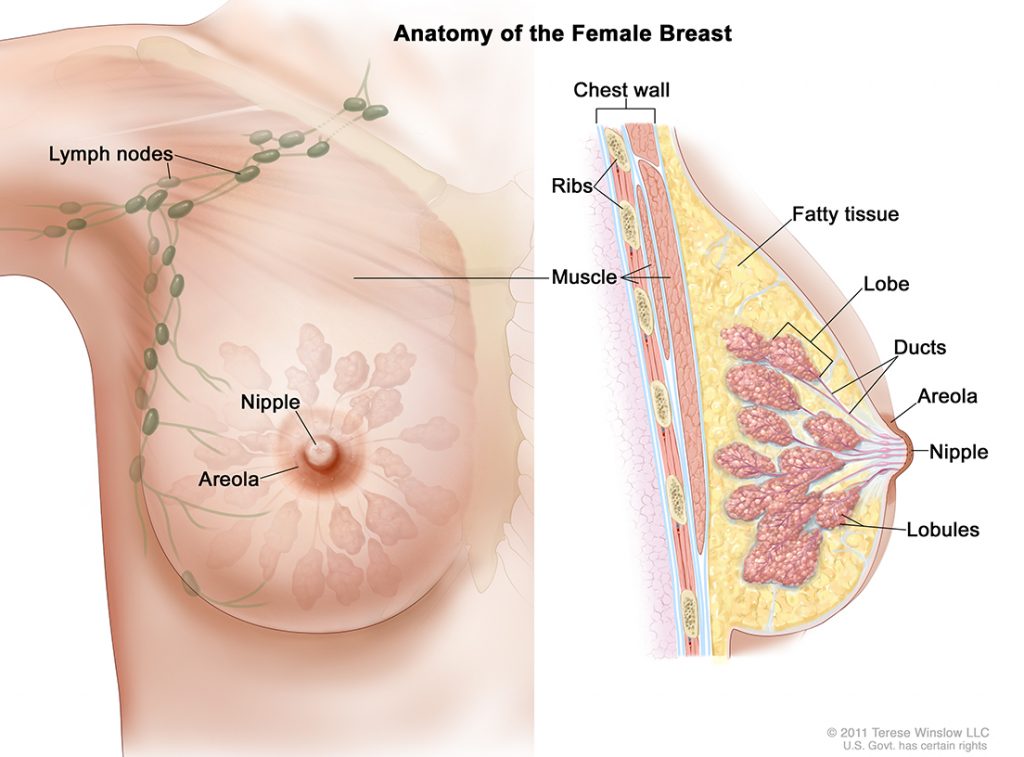 Anatomy of the Female Breast

Each breast has 15 to 20 overlapping sections called lobes. Within each lobe are many smaller lobules, which end in dozens of tiny bulbs that can produce milk. The lobes, lobules, and bulbs are all linked by thin tubes called ducts. These ducts lead to the nipple in the center of a dark area of skin called the areola. Fat fills the spaces around the lobules and ducts. There are no muscles in the breast, but muscles lie under each breast and cover the ribs. Each breast also contains blood vessels and vessels that carry colorless fluid called lymph.

The lymph vessels lead to small bean-shaped organs called lymph nodes. Clusters of lymph nodes are found near the breast in the axilla (under the arm), above the collarbone, and in the chest. Lymph nodes are also found in many other parts of the body.

Changes in certain genes (BRCA1, BRCA2, and others) make women more susceptible to breast cancer. In families in which many women have had the disease, gene testing can show whether a woman has specific genetic changes known to increase the susceptibility to breast cancer. Doctors may suggest ways to try to delay or prevent breast cancer, or improve the detection of breast cancer in women who have the genetic alterations. For more information about gene testing, read the Causes and Prevention section under The Promise of Cancer Research.

A woman’s risk for developing breast cancer increases if her mother, sister, daughter, or two or more other close relatives, such as cousins, have a history of breast cancer, especially at a young age.

Having a diagnosis of atypical hyperplasia or lobular carcinoma in situ (LCIS) or having had two or more breast biopsies for other benign conditions may increase a woman’s risk for developing cancer.

Women age 45 and older whose mammograms show at least 75 percent dense tissue are at increased risk. Dense breasts contain many glands and ligaments, which make breast tumors difficult to “see,” and the dense tissue itself is associated with an increased chance of developing breast cancer.

Women whose breasts were exposed to radiation during their childhood, especially those who were treated with radiation for Hodgkin’s disease, are at an increased risk for developing breast cancer throughout their lives. Studies show that the younger a woman was when she received her treatment, the higher her risk for developing breast cancer later in life.

Women who had their first child after the age of 30 have a greater chance of developing breast cancer than women who had their children at a younger age. Also at a somewhat increased risk for developing breast cancer are women who started menstruating at an early age (before age 12), experienced menopause late (after age 55), never had children, or took hormone replacement therapy or birth control pills for long periods of time. Each of these factors increases the amount of time a woman’s body is exposed to estrogen. The longer this exposure, the more likely she is to develop breast cancer.

Breast cancer classification is determined by the location and cellular type, which is identified via a tissue sample (biopsy).

Understanding the type and stage of breast cancer you have is essential in determining your treatment options.

The most common type of breast cancer begins in the lining of the ducts and is called ductal carcinoma. Another type, called lobular carcinoma, arises in the lobules. When breast cancer spreads outside the breast, cancer cells are often found in the lymph nodes under the arm (axillary lymph nodes). If the cancer has reached these nodes, it may mean that cancer cells have spread to other parts of the body—other lymph nodes and other organs, such as the bones, liver, or lungs—via the lymphatic system or the bloodstream.

Cancer that spreads is the same disease and has the same name as the original (primary) cancer. When breast cancer spreads, it is called metastatic breast cancer, even though the secondary tumor is in another organ. Doctors sometimes call this “distant” disease.

Early breast cancer usually does not cause pain. In fact, when breast cancer first develops, there may be no symptoms at all. But as the cancer grows, it can cause changes that women should watch for:

A woman should see her doctor about any symptoms like these. Most often, they are not cancer, but it’s important to check with the doctor so that any problems can be diagnosed and treated as early as possible.